A Captain One Star Story

Captain One Star and his first mate High Expectations decided to change their regular Friday routine. Yes, we apologize to the regular businesses we visit on Fridays for not bringing our money back on this particular day.

You see we asked the scary question, “Should we do the usual or should we try something new?” You already know we tried something new. Yes, breakfast.

One person working the front, and the familiar you can sit anywhere response. Let’s take the table by the window nice lighting today. Followed by the standard, “What would you like to drink?” Nothing out of the ordinary yet; hmmm, pancakes. High Expectations says, “I wonder if they have maple syrup or just corn syrup?”

High Expectations gets up and goes to find

the waitress and says, “We’re ready to order.” She did not like being interrupted doing whatever it was she was doing. We were the only active table in the restaurant at the time. Everybody else was finished and preparing to leave.

Do you know what you guys will be having this morning?

I have a question, “Do you have maple syrup or just corn syrup?”

I don’t know. I think its maple syrup. Let me check. She goes to the back and returns. Nope, it’s corn syrup.

Ok, I’ll have the omelet just like Captain One Star.

That’s the bar any restaurant has to overcome. Pretty low considering Captain One Star is not a cook or a want-a-be chef. He’s not even a foodie. He has had some amazing meals. But, this omelet was not one of them.

When McDonald’s eggs come out better than a breakfast place that’s a problem.

High Expectations goes to pay. They don’t take AMEX and the server didn’t know that. That’s immediate off our list, we will never come back unless you’re freaking amazing. Why? Because, we don’t have to keep all the stupid receipts, it just goes straight into our accounting system. That makes our days of adventure much easier for us the customer.

AMEX only costs the business an extra 1% of revenue, and you make the business customer like us happy. Are you nuts? Let the customer pay how they want to pay. Don’t become another story of Captain One Stars.

Guess what the local brewery that we visited for a beer instead of a restaurant that afternoon also didn’t take AMEX. Never taking anybody for business back there again.

As we were blasting around town, I had to take my first mate past the new location of our favorite Thai restaurant that we haven’t visited since it moved. I had to point it out to him even though we had driven past it several times getting coffee. Yes, it’s a terrible location. People will only go so far out of their way. They went from the funky hip old downtown town to hidden. Bad move on their part. Maybe someday I will go in to see how they are doing. I’m a little bit afraid because as traffic goes down often so does food quality.

Are you disappointing your customers? When was the last time you played the customer or had someone you know play customer? You need to see your business from your customer’s point of view. That’s the only one that counts.

Captain One Star had a great dinner cooked by his wife and that ended the Day of Dreadful Disappointment. 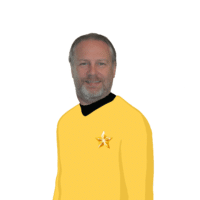