I couldn’t believe it was happening to me. I decided to switch careers and become a marketer for two reasons. One there are no emergencies in marketing, and marketing can’t solve an emergency. This means no middle of the night server down calls like when I was the computer geek. The other reason is I don’t have to get dirty. I won’t have to crawl around under desks or into those strange little closets that hold the server, the router, the mop, etc.

The morning I walked into my dining room, which I use as a boardroom for my business partner and me. I discovered water had landed on the papers the table. I looked up. Swore. Swore again. The ceiling had watermarks, big brown ugly marks.

What I knew these watermarks were telling me is I have a bigger problem. The shower upstairs is leaking and going to frig up the ceiling if I don’t get this fixed ASAP. I called a plumber. Not just any plumber, the one with the best and most Google reviews. They answered and said they could have a guy there right away and gave me his name.

Near the end of the three-hour time window, I get a call from the frazzled customer service lady at the plumbing company. Apologizing about a technology glitch and how that had kept the plumber from arriving. Strike one. But, hey I’m a geek I know these things happen.

His arrival interrupted a business meeting. I had planned based upon the original timing, my fault for trusting the original plan. The plumber was pleasant and smiling when he arrived. They had communicated my problems to him from the original phone call well.

I showed him the ceiling. Then the tap in the kitchen I wanted a quote to fix the dripping. And, this is where it started to go bad. Oh, that’s a Moen. Take a picture of the cracked sprayer thing and send that to Moen. They will send you back a cartridge and the sprayer thing and then we can install that. Strike two: I have to do what now?

We head upstairs. I show him the backup shower, which needs a simple cartridge replacement so I can make the family happy again. He verifies this and says, yes it needs a cartridge and we move onto the real problem the shower that is leaking through the ceiling.

We turn the fancy massaging, rain watering, with shower wand wall mounted thing on. Waters running out of the back of it and down the showerwall at the bottom. Remember I called because I know there is a shower problem.

He looks sees a crack in the plastic and points it out to me as the problem. He says this looks like a Home Depot unit. I say, “I think so.” because the guy before me installed it. He recommends I get a new one and then call them back to do the install. I did look it up later it is six hundred and sixty-four dollars before taxes and takes ten to twelve days to arrive. Don’t worry I recovered from the shock after a while.

He builds the quote on his cute little iPad. Pretty slick actually. Then hits me with the price. Low end four hundred and at the high end five hundred, I smile and type in my email address to get the quotes. But, oh don’t worry this quick tour of your problems and this quote I just gave you that’s free. Strike Three. You, good sir, hold onto your three plumbing problems because you don’t need a working shower in the house. You do a bunch of work for me and then call me back to do the install.

Where is this rolling warehouse of products? Cartridges, are they that special? Contact the vendor to get the parts covered under warranty? My family has to use the shower in the basement until I spend a ton of time and money to get the parts so they can install them? Or continue to use the shower in my on-suite and ruin the ceiling in my boardroom.

Nope, no way, time to get some dirt under my fingernails.

Now I’m that guy writing the one-star review I have read all to often doing competitive analysis for the plumbers I market.

Yes, I showered this morning in my on-suite a connection had come loose.

Stay tuned until the next adventure in customer service from Captain One Star. 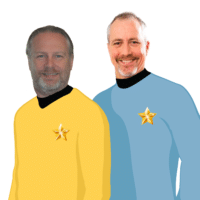